Skip to main content
This is documentation for Unity Multiplayer Networking 1.0.0, which may be a previous or preview version.
For up-to-date documentation, see the latest version (1.1.0).
Version: 1.0.0
PDF
Edit this page
Log an issue

The Animator trigger property type ("trigger") is basically nothing more than a boolean value that, when set to true, will get automatically reset back to false after the Animator component has processed the trigger. In most cases, a trigger is used to initiate a transition between Animator layer states. In this sense, one can think of a trigger as a way to signal the "beginning of an event". Because trigger properties have this unique behavior, they require that you to set the trigger value via the NetworkAnimator.SetTrigger method.

If you set a trigger property using Animator.SetTrigger then this will not be synchronized with non-owner clients.

The default setting for NetworkAnimator is server authoritative mode. When operating in server authoritative mode, any animation state changes that are set (i.e. triggers) or detected (i.e. change in layer, state, or any Animator properties excluding triggers) on the server side will be synchronized with all clients. Because the server initiates any synchronization of changes to an Animator's state, a client that is the owner of the NetworkObject associated with the NetworkAnimator could lag by roughly the full round trip time (RTT). Below is a timing diagram to demonstrate this:

In the above diagram, a client might be sending the server an RPC to notify the server that the player is performing some kind of action that could change the player's animations (including setting a trigger). Under this scenario, the client sends an RPC to the server (half RTT), the server processes the RPC, the associated Animator state changes are detected by the NetworkAnimator (server-side), and then all clients (including the owner client) are synchronized with the changed.

The same rule for setting trigger properties still applies to owner clients. As such, if you want to programmatically set a trigger then you still need to use NetworkAnimator.SetTrigger.

Using NetworkAnimator is a pretty straight forward approach with the only subtle difference being whether you are using a server or owner authoritative model.

NetworkAnimator is one of several possible ways to synchronize animations during a network session. Netcode for GameObjects provides you with the building blocks (RPCs, NetworkVariables, Custom Messages, etc.) needed to create a completely unique animation synchronization system that has a completely different and potentially more optimized approach. NetworkAnimator is a straight forward approach provided for users already familiar with the Animator component and, depending upon your project's design requirements, might be all that you need. 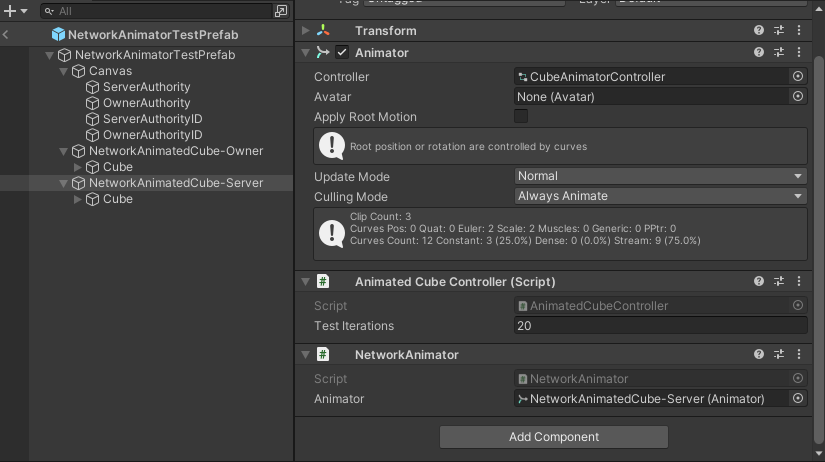 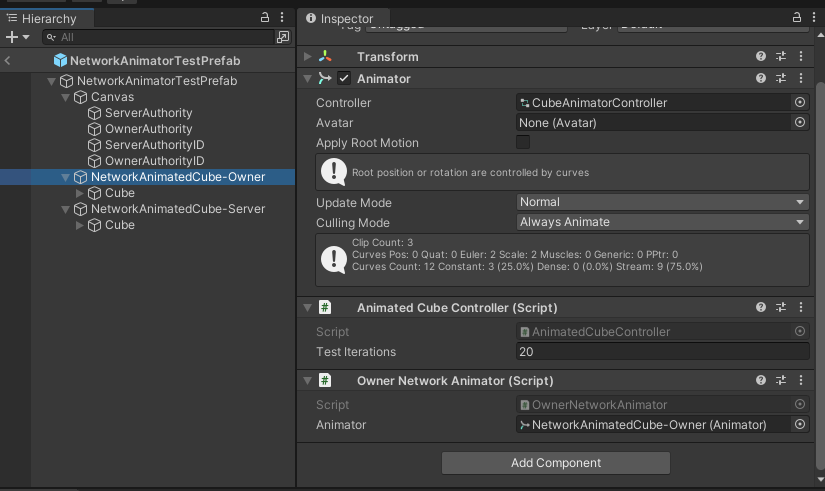 While it isn't advised to have different NetworkAnimator authoritative models "under the same root network prefab GameObject", you can have multiple children that each have their own Animator and NetworkAnimator all housed under a single NetworkObject and all use the same authoritative model. However, you should always consider the balance between performance (cpu and/or bandwidth consumption) and convenience/modularity.

For all Animator properties (with the exception of triggers), you can set them directly via the Animator class. As an example, you might use the player's normalized velocity as a way to control the walking or running animation of a player. You might have an an Animator float property called "AppliedMotion" that you would set on the authoritative instance (server or owner) like such:

For triggers you always want to use NetworkAnimator. One example might be that you use a trigger, let's call it "IsJumping", to start a blended transition between the player's walking/running animation and the jumping animation: