Use this guide to learn how to create your first NGO project. It walks you through creating a simple Hello World project that implements the basic features of Netcode for GameObjects (NGO).

Before you start, ensure you have the following prerequisites:

This section guides you through adding the essential components of a networked game:

This section guides you through creating a NetworkManager component. 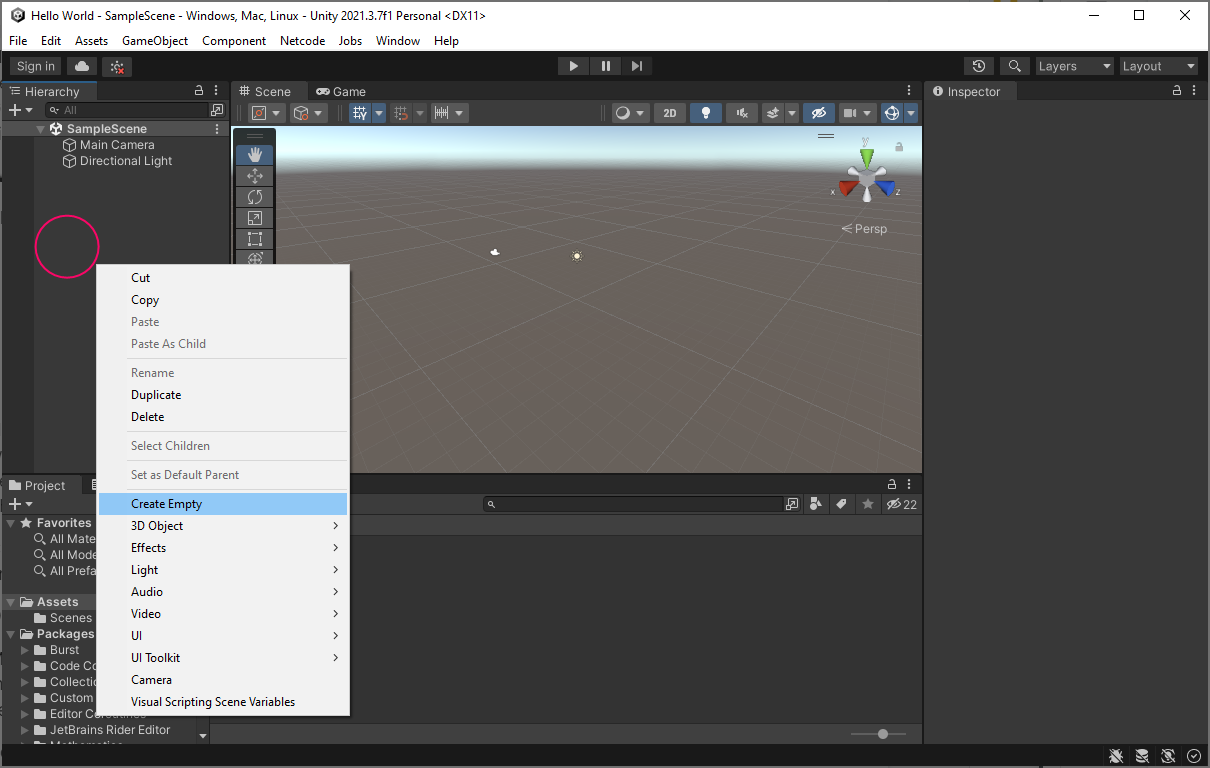 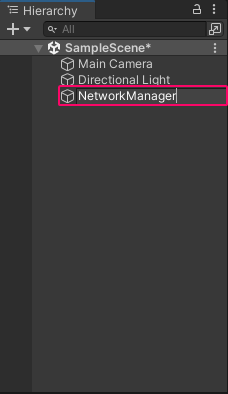 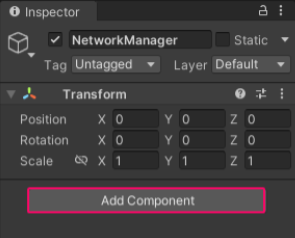 Create an object to spawn for each connected player#

When you drop the Prefab into the PlayerPrefab slot, you are telling the library that when a client connects to the game, it should automatically spawn this Prefab as the character for the connecting client. NGO won’t spawn a player object if you don't have any Prefab set as the PlayerPrefab. See Player Objects.

This section guides you through creating an object that spawns for each connected player. 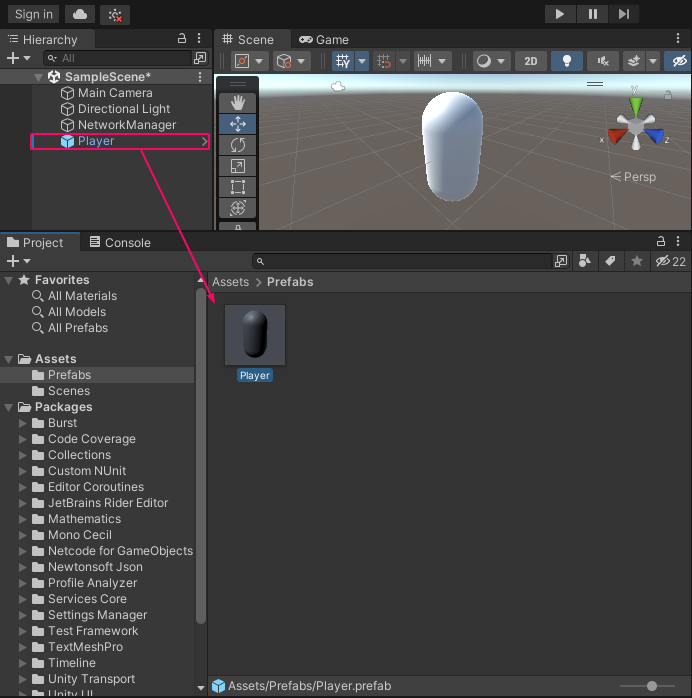 You can remove the Player object from the scene because you assign this network Prefab to the Player Prefab property in the NetworkManager component. The library doesn't support defining a player object as an in-scene placed NetworkObject.

Adding the Plane adds a visual reference point to visualize the Player prefab’s position, but it isn’t necessary. 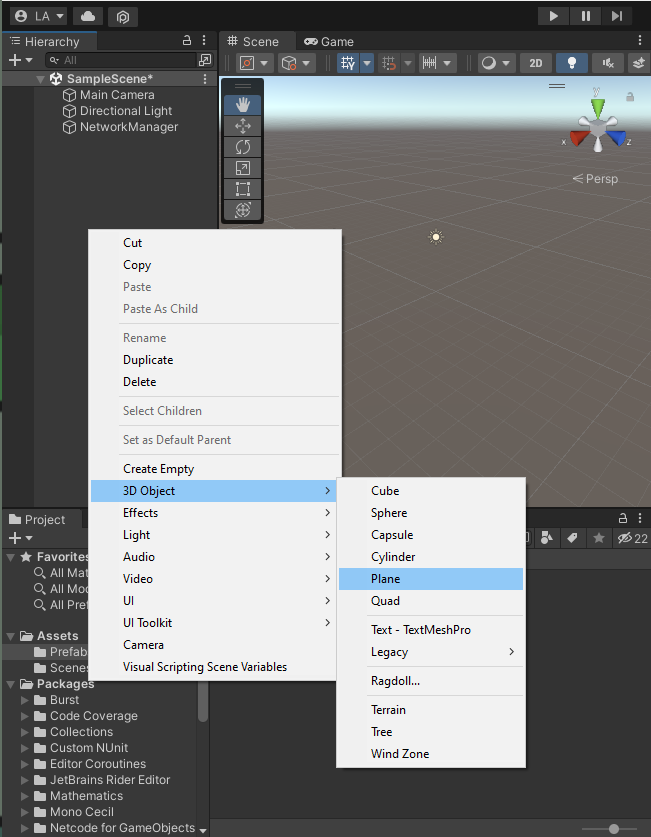 Add your scene to the build#

This section guides you through adding your scene to the build.

The Enable Scene Management for the NetworkManager setting allows the server to control which scenes should load for the clients. However, you must add the current scene to the build to enter Play mode.

The Enable Scene Management option for the NetworkManager is enabled by default.

You should see Scenes/SampleScene listed under Scenes In Build. You can close the Build Settings window.

This section guides you through adding basic RPCs to the project.

Add the RpcTest.cs script to the Player prefab:

This section guides you through testing the RPCs you added in the earlier section.

Instead of using the command line helper script, you can use Multiplayer Play Mode (MMPM) package, which lets you run multiple instances of the Unity Editor to test multiplayer functionality. See MPPM to learn more.

Note: MPPM is only supported in Unity Editor version 2023.1 and later.

The client kicks off the exchange in its Update call for the first time with a counter value of 0. It then makes an RPC call to the server with the next value. The server receives this and calls the client. You should see the following in the Console of the server and client respectively.

Only the client owning the NetworkObject owning the RpcTest script will send RPCs on the server, but they will all receive RPCs from the server. This means that if you test with multiple clients the consoles will log Rpcs being received once per NetworkObject per iteration on the server and all clients. If testing with a host and a client, you will see the following on the host's Console. This is because as a server it will receive the other client's server RPCs and as a client it will also receive its own client RPCs.

The NetworkObjectId here is 2 because the host will also have a NetworkObject with the RpcTest script spawned for it, but it won't be sending the initial RPC starting the chain because it's a server.

Extend the functionality with scripts#

The section shows how to extend the functionality of the Hello World project with two scripts: HelloWorldPlayer.cs and HelloWorldManager.cs.

In the Hello World project from earlier), you created a NetworkManager by adding the pre-created NetworkManager component. This component allows you to start a Host, Client, or Server in Play mode by inspecting the component. The HelloWorldManager.cs script simplifies this slightly by creating an on-screen UI button menu upon entering Play mode.

The HelloWorldManager.cs script accomplishes this menu within the StartButtons(). After you select a button, the StatusLabels()method adds a label on-screen to display which mode you have selected. This helps distinguish game view windows from each other when testing your multiplayer game.

As seen in the earlier code snippet, the HelloWorldManager.cs script also utilizes the NetworkManager ‘s instance via its singleton to grab useful properties like the IsClient, IsServer, and IsLocalClient. The IsClient and IsServer properties dictate the established connection state.

The HelloWorldManager.cs script introduces a new method called SubmitNewPosition() that the HelloWorldPlayer script uses to create a simple RPC call.

The HelloWorldPlayer class inherits from Unity.Netcode‘s NetworkBehaviour instead of MonoBehaviour. This allows you to customize the networking code as you override what happens when the Player spawns.

For multiplayer games, every object runs on at least two machines: player one and player two. Because of this, you need to ensure both machines see the same behavior and have the correct information about the object. One of the instances that come into play then is to understand how the Player moves. Only one player should control how the Player object moves. The following code enforces this by validating if the machine running the code is the player's owner.

Any MonoBehaviour implementing NetworkBehaviour can override the Netcode method OnNetworkSpawn(). The OnNetworkSpawn() method fires in response to the NetworkObject spawning. The HelloWorldPlayer class overrides OnNetworkSpawn since clients and the server run different logic.

You can override this behavior on any NetworkBehaviour.

Since the server and client can be the same machine and the Player's owner (aka Host), you want further to differentiate the two and have different Move behavior for each.

Add the HelloWorldPlayer.cs script to the Player prefab#

This section guides you through adding the HelloWorldPlayer.cs script to the Player prefab.

Add the HelloWorldPlayer.cs script to the Player Prefab as a component:

The HelloWorldPlayer class defines a NetworkVariable to represent the player's networked position.

The script calls the Move() method on both client and server instances of the player. The Move() script does the following:

This section walks you through the sample code that adds a simple RPC.

If the player is a server-owned player at OnNetworkSpawn(), you can immediately move this player, as suggested in the following code.

If the player is a client, the script calls a ServerRpc. Clients can invoke a ServerRpc to execute on the server.

The ServerRpc sets the position NetworkVariable on the server's instance of the player by just picking a random point on the plane.

The server instance of the player modifies the Position NetworkVariable through the ServerRpc. If the player is a client, it must apply the position locally inside the Update loop.

The method in the code block above adds a contextual button that changes depending on whether the client is a server or a client. When you press the button this method creates, it finds your local player and calls Move().

You can now create a build that shows the concepts outlined above.

Create two build instances: one for the host and the other for the client (to join the host's game).

Both build instances can move the player with the GUI button. The server moves the player immediately and replicates the movement on the client.

This section guides you through adding a NetworkTransform component that moves the player.

Add a NetworkTransform component to the Player prefab:

Add the NetworkTransformTest script to the Player prefab:

This section guides you through testing the NetworkTransform you added in the earlier section.

To see if everything works as expected, test starting a host in the Unity Editor. A host plays the role of a server and a client at the same time. 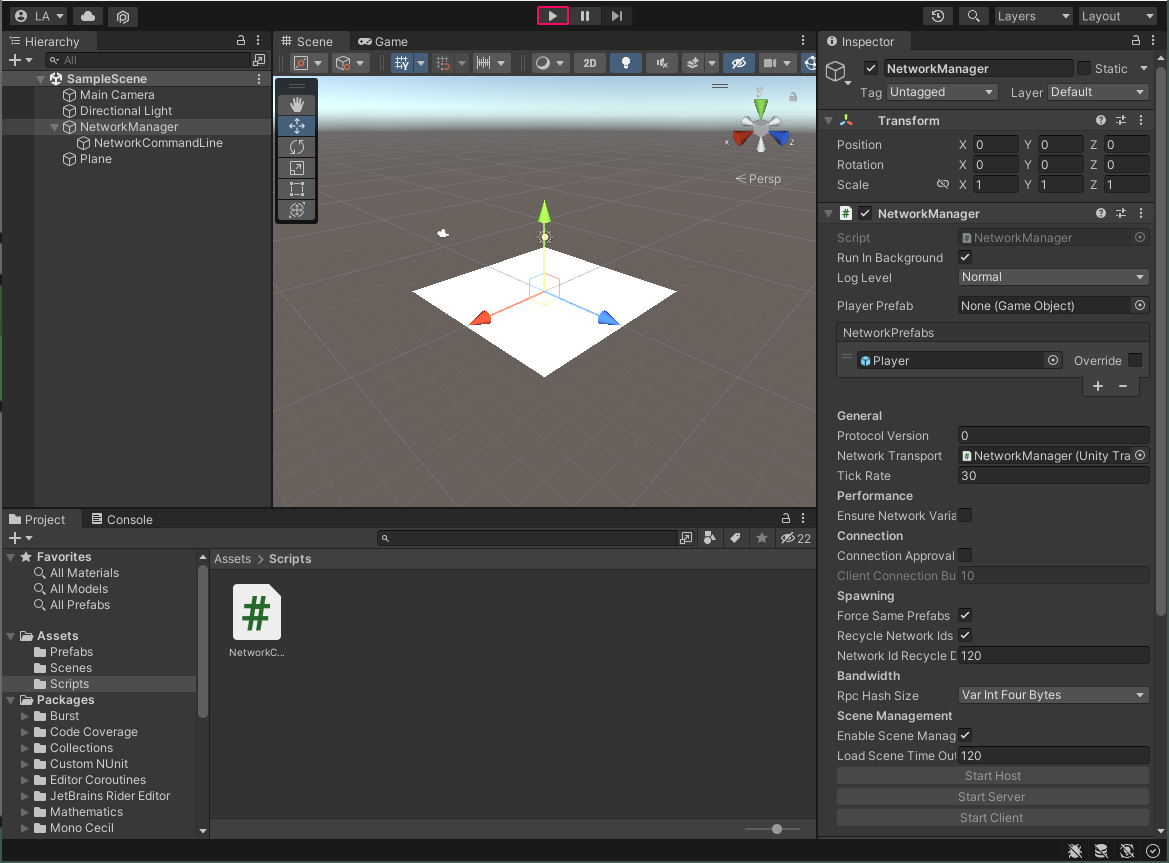 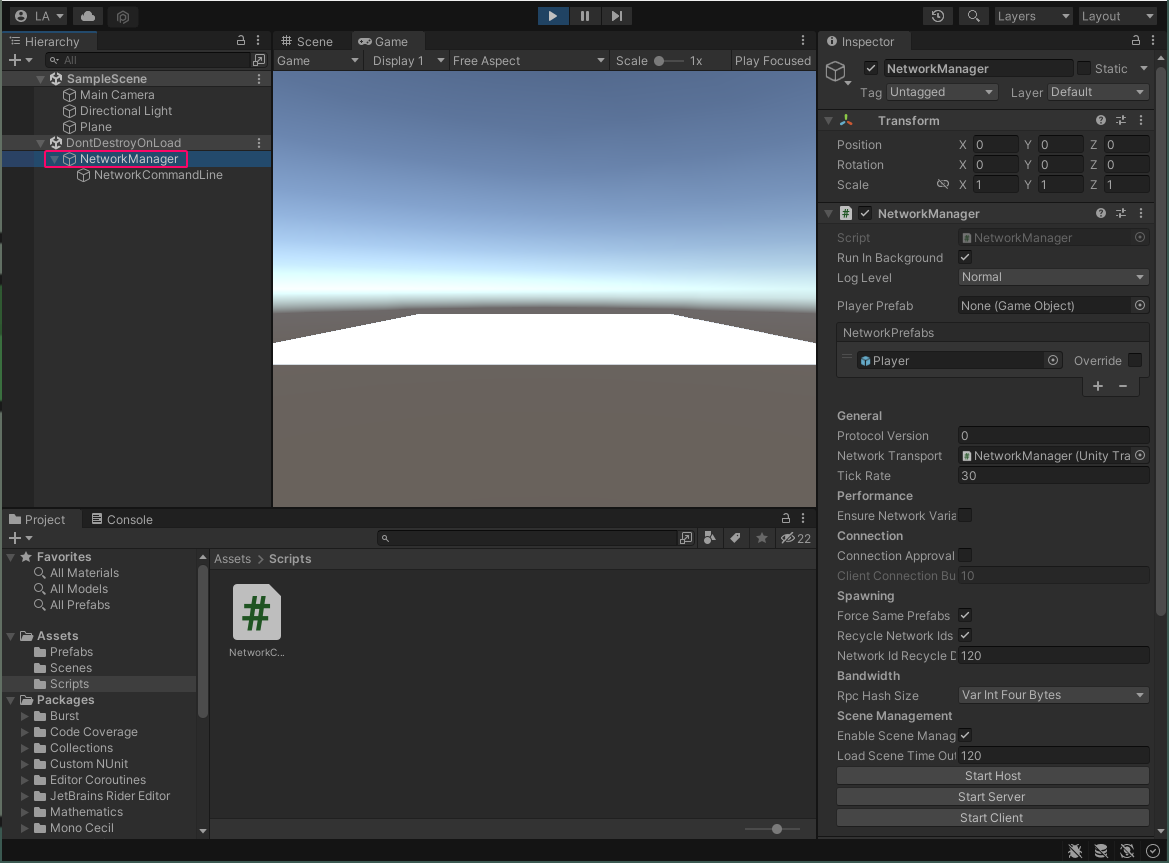 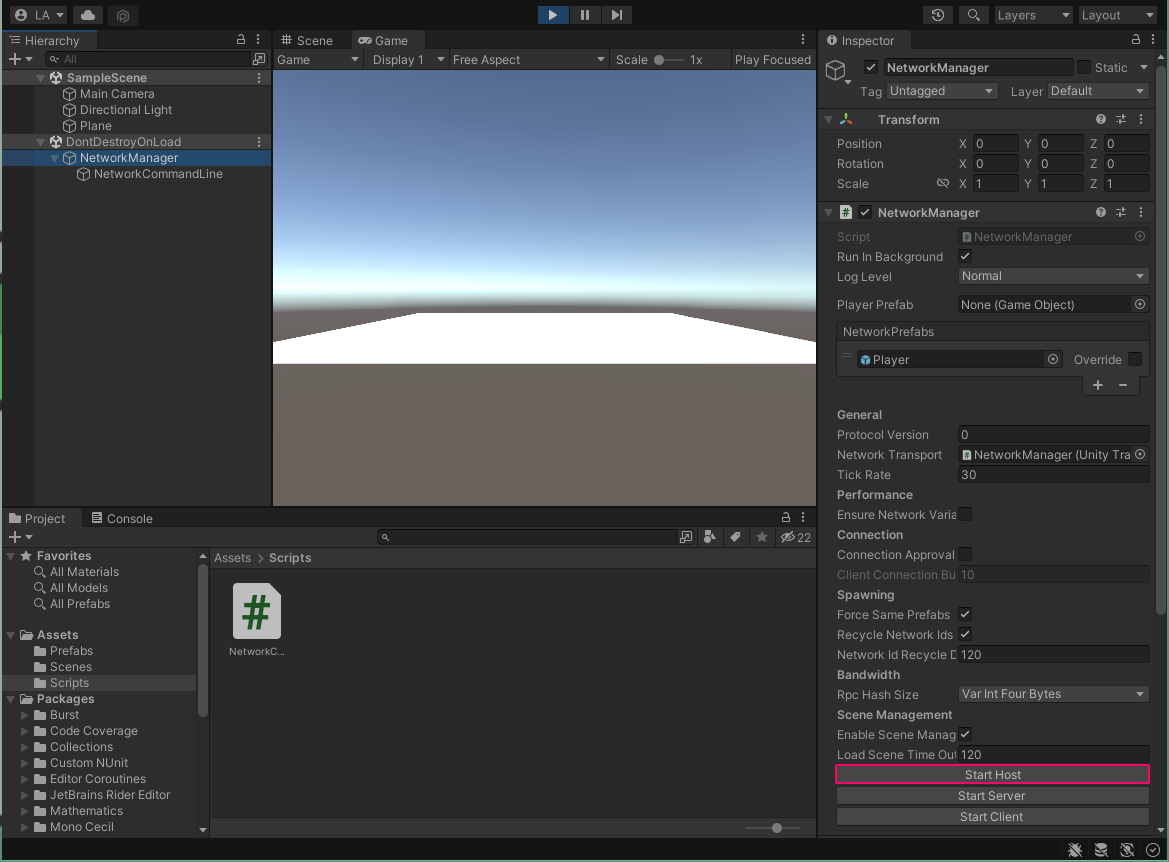 If it works correctly, you should see the option to Stop Host in the Inspector tab.