See the RPC vs NetworkVariable tutorial for more information.

We want the full history of inputs sent, not just the latest value. There is no need for NetworkVariables, you just want to blast your inputs to the server. Since Boss Room is not a twitch shooter, we send inputs as reliable RPCs without worrying about the additional latency an input loss would add.

The following RecvPerformHitReactionClient call sends actions from server to client:

For example, the Boss Room project "ouch" action RPC mentioned for NetworkCharacterState is interesting for optimization purposes. You would normally want to have only one RPC for an action and let the client decide who should play the associated animation. Due to "ouch" being a long running action over multiple frames, you do not know yet when sending the initial RPC which characters will be affected by that action. You want this to be dynamic as the boss is hitting targets. As a result, multiple RPCs will be sent for each hit character.

The archer's arrows uses a standalone GameObject that is replicated over time. Since this object's movements are slow moving, we made the choice to use state to replicate this ability's status, in case a client connected while the arrow was flying.

We could have used an RPC instead, for example the Mage's projectile attack. Since it is expected for that projectile to be quick, we are not affected by the few milliseconds where a newly connected client could miss the projectile and we save on bandwidth having to manage a replicated object. Instead a single RPC is sent to trigger the FX client side.

We could have used a "kill" RPC to set a character as dead and play the appropriate animations. Applying our "should that information be replicated when a player joins the game mid-game" rule of thumb, we used NetworkVariables instead. We used the OnValueChanged callback on those values to play our state changes animation.

Error when connecting after imps have died: The following is a small gotcha we encountered while developing Boss Room. Using NetworkVariables is not magical. If you use OnValueChanged, you still need to make sure you initialize your values when spawning for the first time. OnValueChanged will not be called when connecting for the first time, only for the subsequent value changes. 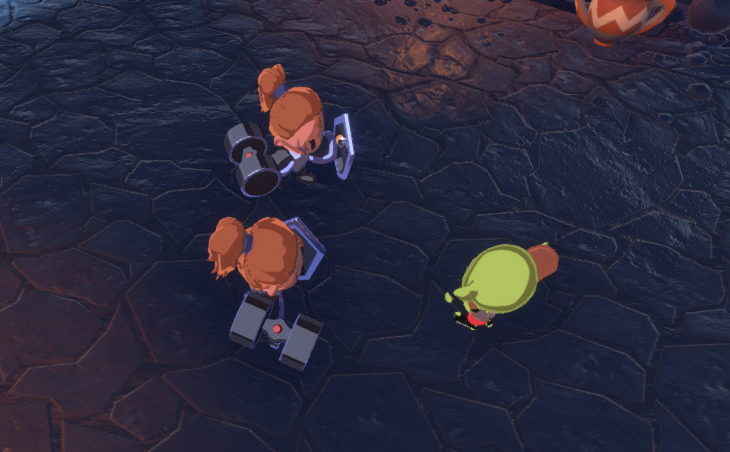 All of our replicated object's position is synced through NetworkVariables, easily collecting and providing data.