Boss Room is a fully functional co-op multiplayer RPG made with Unity Netcode. It's an educational sample designed to showcase typical Netcode patterns often featured in similar multiplayer games. Players work together to fight Imps and a boss using a click-to-move control model.

This article describes the high-level architecture of the Boss Room codebase and dives into some reasoning behind architectural decisions.

Boss Room’s code is organized into multiple domain-based assemblies, each with a relatively self-contained purpose.

An exception to this organization structure is the Gameplay assembly, which houses most of the networked gameplay logic and other functionality tightly coupled with the gameplay logic.

This assembly separation style enforces better separation of concerns and helps keep the codebase organized. It also uses more granular recompilation during iterations to save time.

The application flow of Boss Room starts with the Startup scene (which should always load first).

The ApplicationController component lives on a GameObject in the Startup scene and serves as the application's entry point (and composition root). It binds dependencies throughout the application's lifetime (the core dependency injection managed “singletons”). See the Dependency Injection section for more information.

Each scene in Boss Room has an entry point component sitting on a root-level GameObject that serves as a scene-specific composition root.

The MainMenu scene only has the MainMenuClientState, whereas scenes that contain networked logic also have the server counterparts to the client state components. In the latter case, both the server and client components exist on the same GameObject.

The NetworkManager starts when the CharSelect scene loads, which happens when a player joins or hosts a game. The host drives game state transitions and controls the set of loaded scenes. Having the host manage the state transitions and scenes indirectly forces all clients to load the same scenes as the server they’re connected to (via Netcode's networked scene management).

Sub-scenes contain spawn points for the enemies and visual assets for their respective level segments. The server unloads sub-scenes that don't have active players and loads the required sub-scenes based on the players' position. If at least one player overlaps with the sub-scene's trigger area, the server loads the sub-scene.

Clients connect directly to a host via an IP address when using IP. However, the IP network transport only works if the client and host are in the same local area network (or if the host uses port forwarding).

With the Unity Relay network transport, clients don’t need to worry about sharing a local area network or port forwarding. However, you must first set up the Relay service.

See the Multiplayer over the internet section of the Boss Room README for more information about using the two network transport mechanisms.

The Unity Transport Package is a network transport layer with network simulation tools that help spot networking issues early during development. Boss Room has both buttons to start a game in the two modes and will setup UTP automatically to use either one of them at runtime.

The ConnectionManager, a simple state machine, owns Boss Room’s network connection flow. It receives inputs from NGO (or the user) and handles the inputs according to its current state. Each state inherits from the ConnectionState abstract class. If you add a new transport, you must extend the StartingHostState and ClientConnectingState states. Both of these classes assume you're using the UTP transport. 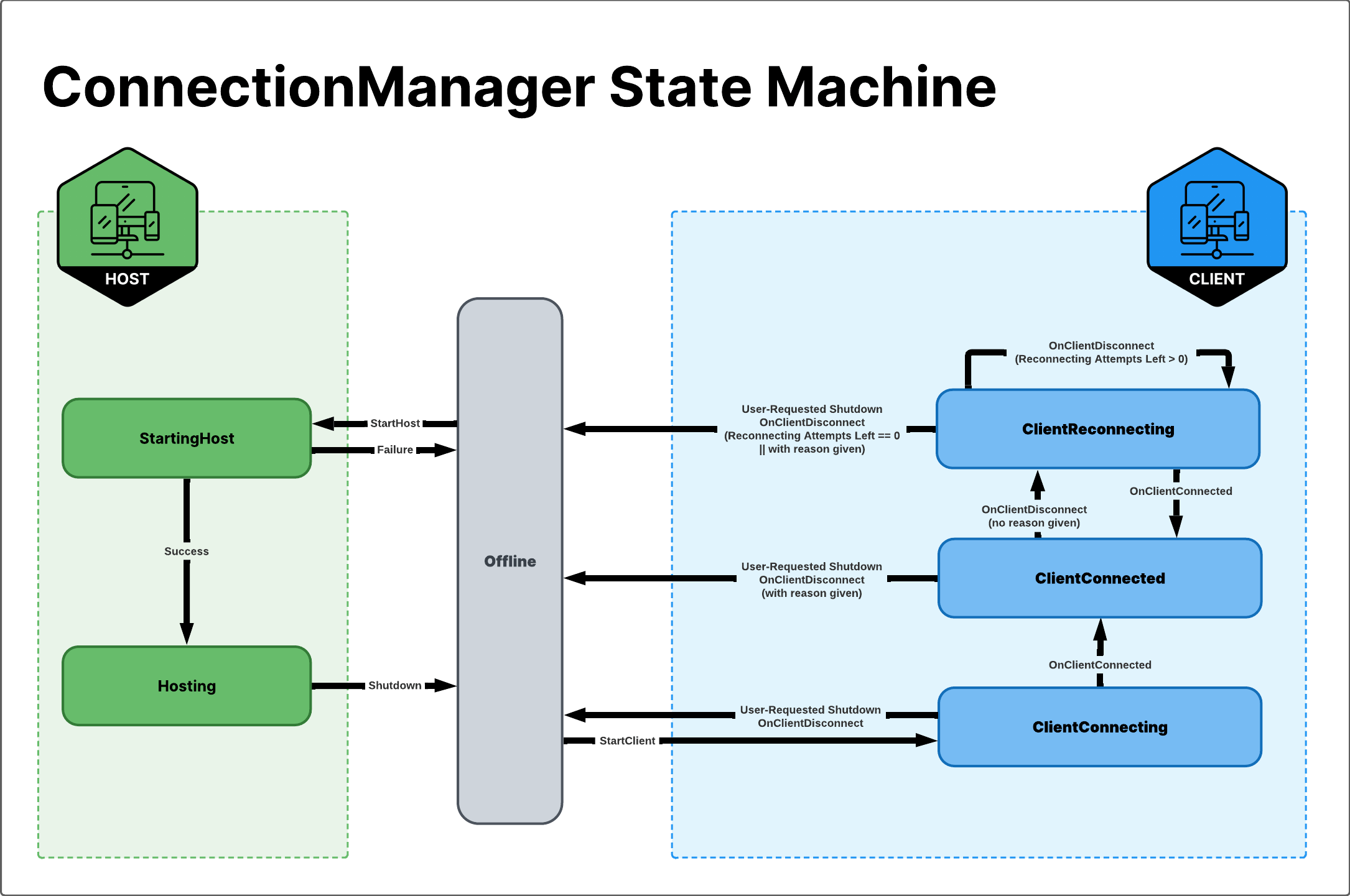 To allow users to reconnect to the game and restore their game state, Boss Room stores a map of the GUIDs for their respective data. This way, it ensures that when a player disconnects, Boss Room accurately reassigns data to that player when they reconnect.

Boss Room is a multiplayer experience designed to be playable over the internet. To effectively support this, it integrates several Unity Gaming Services (UGS):

An Avatar is at the same level as an Imp and lives in a scene. A Persistent Player lives across scenes.

There is no need to mark Persistent Player instances as DontDestroyOnLoad. NGO automatically keeps these prefabs alive between scene loads while the connections are live.

The Persistent Player Prefab stores synchronized data about a player, such as their name and selected PlayerAvatar GUID.

Each connected client owns their respective instance of the PlayerAvatar prefab. NGO destroys the PlayerAvatar instance when a scene load occurs (either to the PostGame or MainMenu scenes) or if the client disconnects.

ClientAvatarGuidHandler, a NetworkBehaviour component residing on the PlayerAvatar Prefab instance, fetches the validated avatar GUID from NetworkAvatarGuidState and spawns a local, non-networked graphics GameObject corresponding to the avatar GUID.

ServerCharacter exists on a PlayerAvatar (or another NPC character) and has server RPCs and NetworkVariables that store the state of a given character. It's responsible for executing the server-side logic for the characters. This server-side logic includes the following:

The GameDataSource.cs singleton class stores all actions and character classes in the game.

CharacterClass is the data representation of a Character and has elements such as starting stats and a list of Actions the character can perform. It covers both player characters and non-player characters (NPCs) alike.

The Action subclasses are data-driven and represent discrete verbs, such as swinging a weapon or reviving a player.

Boss Room's Action System is a generalized mechanism for Characters to "do stuff" in a networked way. ScriptableObject-derived Actions implement the client and server logic of any given thing the characters can do in the game.

There are a variety of actions that serve different purposes. Some actions are generic and reused by multiple character classes, while others are specific to a single class.

Each character can have multiple actions that exist simultaneously but only one active Action (also called the "blocking" action). If a character triggers a later action, Boss Room queues it behind the current action. Non-blocking actions can run in the background without interfering with the current action.

Boss Room synchronizes actions by calling a ServerCharacter.RecvDoActionServerRPC and passing the ActionRequestData, a struct that implements the INetworkSerializable interface.

ActionRequestData has an ActionID field, a simple struct that wraps an integer containing the index of a given ScriptableObject Action in the registry of abilities available to characters. The registry of available character abilities is stored in GameDataSource.

Boss Room uses the ActionID struct to reconstruct the requested action and play it on the server by creating a pooled clone of the ScriptableObject Action that corresponds to the action. Clients then play out the visual part of the ability (including particle effects and projectiles).

It’s also possible to play an anticipatory animation on the client requesting an ability. For instance, you might want to play a small jump animation when the character receives movement input but hasn’t yet moved (because it hasn’t synchronized the data from the server).

Server and Client ActionPlayers are companion classes to actions Boss Room uses to play out the actions on both the client and server.

The following list describes the movement flow of a player character.

The Visuals GameObject never outpaces the simulation GameObject and is always slightly behind the networked position and rotation.

Instead, find a NavMeshComponent in the given scene (for example, a NavMeshSurface) and use the Bake button on that script.

You should also ensure each scene has exactly one navmesh file. You can find navmesh files stored in a folder with the same name as the corresponding scene (prefixed by “NavMesh-”).

DI also allows Boss Room to circumvent the problem of cross-scene references to common dependencies, even though it still has to manage the lifecycle of MonoBehaviour-based dependencies by marking them with DontDestroyOnLoad and destroying them manually when appropriate.

ApplicationController inherits from the VContainer's LifetimeScope, a class that serves as a dependency injection scope and bootstrapper that facilitates binding dependencies. Scene-specific State classes inherit from LifetimeScope, too.

In the Unity Editor Inspector, you can choose a parent scope for any LifetimeScope. When doing so, it’s helpful to set a cross-scene reference to some parent scopes, most commonly the ApplicationController. Setting a cross-scene reference allows you to bind scene-specific dependencies while maintaining easy access to the global dependencies of the ApplicationController in the State-specific version of a LifetimeScope object.

A challenge the Boss Room development team encountered when developing Boss Room was that code would often run in a single context, either client or server. Reading mixed client and server code adds a layer of complexity, making mistakes more likely.

The initial thought was that separating assemblies by client and server would allow for easier porting to a dedicated game server (DGS) model afterward; the team would only need to strip a single assembly to ensure code only runs when necessary.

However, this approach had two primary issues:

After investigation, the Boss Room development team determined that client/server separation was unnecessary for the following reasons:

After those experiments, the Boss Room development team established new rules for the codebase:

You still need to take care of code executing in Start and Awake. If the code in Start and Awake runs simultaneously with the NetworkManager's initialization, it might not know whether the player is a host or client.

Boss Room implements a dependency injection-friendly Publisher-Subscriber pattern that allows Boss Room to send and receive strongly-typed messages in a loosely coupled manner, where communicating systems only know about the IPublisher/ISubscriber of a given message type.

Because publishers and subscribers are classes, Boss Room can have more interesting behavior for message transfer, such as buffered and networked messaging. See the NetworkedMessageChannel section.

These mechanisms allow for strong separation of concerns and coupling reduction using PubSub and dependency injection (DI). Boss Room uses DI to pass the handles to the IPublisher or ISubscriber of any given event type. As a result, message publishers and consumers are unaware of each other.

The Boss Room development team considered using a third party library for messaging (like MessagePipe). However, since Boss Room needed custom networked channels and the use cases were quite simple, the team decided to go with an in-house light implementation. If Boss Room was a full game with more gameplay, it'd benefit more from a library that with more features.