An Internet Protocol address is a numerical label assigned to each device connected to a computer network that uses the Internet Protocol for communication. An IP address serves two main functions: host or network interface identification and location addressing.

A network port is a process-specific or an application-specific software construct serving as a communication endpoint, which is used by the Transport Layer protocols of Internet Protocol suite, such as User Diagram Protocol (UDP) and Transmission Control Protocol (TCP)

A socket is one endpoint of a two-way communication link between two programs running on the network. A socket is bound to a port number so that the TCP layer can identify the application that data is destined to be sent to. An endpoint is a combination of an IP address and a port number.

Packets are composed of a header and payload.

The payload appears immediately after the header.

Transmission Control Protocol (TCP) is a connection-oriented communications protocol that facilitates the exchange of messages between computing devices in a network. It is the most common protocol in networks that use the Internet Protocol (IP); together they are sometimes referred to as TCP/IP.

TCP takes messages from an application/server and divides them into packets, which can then be forwarded by the devices in the network – switches, routers, security gateways – to the destination. TCP numbers each packet and reassembles them prior to handing them off to the application/server recipient. Because it is connection-oriented, it ensures a connection is established and maintained until the exchange between the application/servers sending and receiving the message is complete.

User Datagram Protocol (UDP) uses a simple connectionless communication model with a minimum of protocol mechanisms. UDP provides checksums for data integrity, and port numbers for addressing different functions at the source and destination of the datagram. It has no handshaking dialogues, and thus exposes the user's program to any unreliability of the underlying network; there is no guarantee of delivery, ordering, or duplicate protection.

UDP is suitable for purposes where error checking and correction are either not necessary or are performed in the application; UDP avoids the overhead of such processing in the protocol stack. Time-sensitive applications often use UDP because dropping packets is preferable to waiting for packets delayed due to retransmission, which may not be an option in a real-time system.

Reliable User Datagram Protocol (RUDP) provides a solution where UDP is too primitive because guaranteed-order packet delivery is desirable, but TCP adds too much complexity and overhead. It provides real-time, reliability and algorithm simplicity of embedded systems, both requirements for RCP and UDP. In order for RUDP to gain higher quality of service, RUDP implements features that are similar to TCP with less overhead.

Another factor that affects the data travel time is the number of stops (or hops) that your data packet must make on its way. Every additional hop also increases the risk that you lose a data packet. 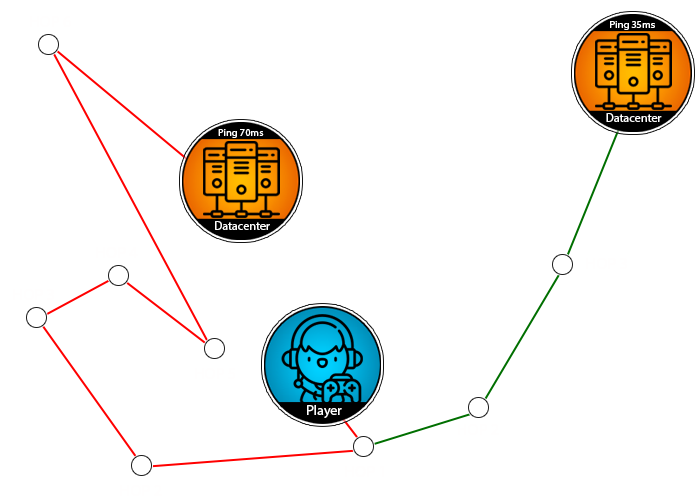 Packet loss — where did my data go?

There is no guarantee that your packet will actually reach its destination. When a packet disappears, this is called packet loss, which is a big problem for real-time applications such as online games, as re-sending that data increases the delay.

STUN is a tool for communications protocols to detect and traverse network address translators that are located in the path between two endpoints of communication. It is implemented as a light-weight client-server protocol, requiring only simple query and response components with a third-party server located on the common, easily accessible network, typically the Internet.

The basic protocol operates essentially as follows: The client, typically operating inside a private network, sends a binding request to a STUN server on the public Internet. The STUN server responds with a success response that contains the IP address and port number of the client, as observed from the server's perspective.

STUN messages are sent in User Datagram Protocol (UDP) packets. Since UDP does not provide reliable transport guarantees, reliability is achieved by application-controlled retransmissions of the STUN requests. STUN servers do not implement any reliability mechanism for their responses. When reliability is mandatory, the Transmission Control Protocol (TCP) may be used, but induces extra networking overhead

ICE is a technique used in computer networking to find ways for two computers to talk to each other as directly as possible in peer-to-peer networking. This is most commonly used for interactive media such as Voice over Internet Protocol (VoIP), peer-to-peer communications, video, and instant messaging.

UDP hole punching establishes connectivity between two hosts communicating across one or more network address translators. Typically, third-party hosts on the public transit network are used to establish UDP port states that may be used for direct communications between the communicating hosts. Once port state has been successfully established and the hosts are communicating, port state may be maintained either by normal communications traffic, or in the prolonged absence thereof, by keep-alive packets, usually consisting of empty UDP packets or packets with minimal non-intrusive content.

Network address translation (NAT) is a method of mapping an IP address space into another by modifying network address information in the IP header of packets while they are in transit across a traffic routing device.